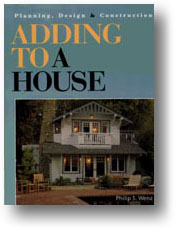 One of the best ways to combat urban sprawl and save money is to recycle an old home. Often older homes seem inadequate because of lack of space or facilities (such as bathrooms, offices, utility rooms, etc.). In Adding to a House, designer/builder Philip Wenz gives you the benefit of his 20 years of building experience. He explains how to:

Evaluate a house for its addition potential, in terms of its resale value and the condition of the structure and site.

Design the addition for continuity with the existing house.

Avoid costly mistakes that leave the house in worse shape than when the project began.

Accurately estimate the cost of any type of addition.

Ensure that the addition conforms to local building codes and zoning regulations.

Make connections between the old and new foundations, framing and roofs.

Now all the essential information about residential additions can be found in one book. 263 pages, 1995

Edward Harland There’s a popular bumper sticker that says “Think Globally, Act Locally.” You can’t get any more local than your own home. One of the best paths to environmentally-friendly housing is recycling old houses, whether you want to improve your current home or “move up” to a better place. Eco-Renovation is specifically aimed at homeowners who want to make existing houses as “green” as possible.

Author Edward Harland provides a concise overview of the major home related ecological questions and concerns and then offers practical solutions and suggestions for renovating the home ecologically. Eco-Renovation will show you how to: Reduce heating bills substantially. Select building materials that are resource efficient and environmentally-safe. Convert and maximize living space. Protect the family from toxic substances.

Edward Harland is an architect specializing in ecological renovation of houses. He has worked in both public and private practice and has also run his own carpentry business, building sunrooms, kitchens and furniture. 241 pages, 1999 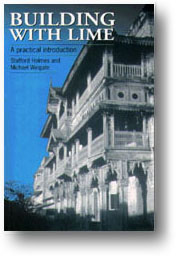 Lime has been used in building for thousands of years and, used well, it continues to be the best and most versatile binder in the world. The special characteristics that make lime particularly appropriate for certain types of building include its porosity and permeability (the ability to “breathe”) and exceptional smoothness of texture. Lime can be used in every building element from the foundation and floor to the walls and roof. Lime can bind sand or other aggregates to form mortar. A similar mix with slightly different aggregate makes plasters to cover interior walls or renders for external applications. Lime can be molded into decorative elements or used as paint. It can be added to soil blocks for greater strength and stability. Before Portland cement, lime was used extensively for building construction and civil engineering. When making repairs or renovating historic structures, it is often more effective to use lime instead of more “modern” materials. Every type of lime has its own particular virtues and limitations and the successful use of lime in construction requires knowledge and skill. The author’s considerable experience with lime in building is brought together into one volume to provide an invaluable source of practical advice. This book is a starting point for those considering lime as a building material, and as a general reference to the broad range of uses for lime in construction. The information will assist manufacturers, investors, suppliers, as well as builders and owners of the buildings themselves to understand its value. Many examples are presented that illustrate the practical and aesthetic advantages of lime along with its commercial potential.

While ageless classics exist, I must deduct one star per 25 year for technical manuals. This however is a library of practical knowledge in one book. This book from ’75 found the perfect balance between techno-engineering texts that no one could read and the books that told you to conserve energy without any real direction or practicality. This book gives practical design tips and easy to use formulas for everything from designing passive solar collectors to generating your own electricity to methane digesters and other waste handling techniques. Water supplies, photovoltaics, house insulation and even placing windbreaks around your house to both cool in the summer and protect in the winter are covered!

I used this book as a text in my Renewable Energy Systems course and learned more practical knowledge from it than I think I have in my 4 years at Cornell! Highly recommended and I hope people will buy it so we can get it back in print!

Alternatives to wood-frame construction have received growing interest over the last several years. The most popular alternative has been insulating concrete forms. These rigid plastic forms stay in place to provide exceptional thermal insulation. This book by the Portland Cement Association is the first construction manual for building with insulating concrete form systems. Based on the lessons of successful builders, the manual offers step-by-step instructions to guide you through every phase: design, site preparation, setting forms, placing concrete, connecting to roof and floors, installing utilities, interior construction and installing fixtures and finishes. This book is packed with helpful photographs, diagrams, tables and charts.

This manual has good information on how to select and pour the right mix for the job, excavate for foundations, lay out the structure, design and build the forms, and finish and cure the concrete.

Order From: Gibbs Smith Publishers
Amazon.com
(links will open in a new window)

Although strawbale construction is beginning to enter the mainstream, many people continue to wonder what a strawbale house looks like. The New Strawbale Home answers definitively, “Anything you want!” Innovative architects and builders are reinventing this century-old technology to create thick walled modern houses of unsurpassed natural beauty.

The New Strawbale Home compiles floor plans and images from forty cutting-edge homes across North America, from California to Quebec, New Mexico to New England, showcasing a spectrum of regional styles and personal aesthetic choices. This practical guide discusses varying climate considerations and essential design details for problem-free construction and low maintenace care, and also points out the ecologically friendly, energy-saving aspects of strawbale construction. The New Strawbale Home beautifully illustrates how building with strawbale allows for maximum personal creativity–whether the finished product is an urban home, a country hideaway, or anything in between.

Author and photographer Catherine Wanek organized the building of a strawbale greenhouse in 1992 and has been an advocate for strawbale construction ever since. She produced and directed the Building with Straw video series, and spent nearly five years publishing and editing The Last Straw Journal. Her first book, The Art of Natural Building was published in 2002. Wanek lives in Kingston, New Mexico.

Building With Junk and Other Good Stuff : A Guide to Home Building and Remodeling Using Recycled Materials Hardcover October 1990 159pp illustrated The publisher, www.loompanics.com , December 19, 1996 …for home handypersons and prospective builders looking for inspiration. -Booklist- A master scrounger’s guide to the millions of dollars of building supplies thrown away every day. -Real Goods- A complete guide to building and remodeling using recycled materials. Millions of dollars worth of building materials are thrown away every day. This book shows how to find, store and use this good stuff. Cover floors, ceilings, walls, foundation, roofs, plumbing, wiring, utilities, windows, doors, cabinetry, trim, insulation, appliances, furniture-even solar power!

The Production of Houses

Order From: Amazon
(links will open in a new window)

As an innovative thinker about building and planning, Christopher Alexander has attracted a devoted following. His seminal books–The Timeless Way of Building, A Pattern Language, the Oregon Experiment, and The Linz Cafe–defined a radical and fundamently new process of environmental design. Alexander now gives us the latest book in his series–a book that puts his theories to the test and shows what sort of production system can create the kind of environment he has envisioned.
The Production of Houses centers around a group of buildings which Alexander and his associates built in 1976 in northern Mexico. Each house is different and the book explains how each family helped to lay out and construct its own home according to the family’s own needs and in the framework of the pattern language. Numerous diagrams and tables as well as a variety of anecdotes make the day-today process clear.
The Mexican project, however, is only the starting point for a comprehensive theory of housing production. The Production of Houses describes seven principles which apply to any system of production in any part of the world for housing of any cost in any climate or culture or at any density.
In the last part of the book, “The Shift of Paradigm,” Alexander describes, in detail, the devastating nature of the revolution in world view which is contained in his proposal for housing construction, and its overall implications for deep-seated cultural change.

Christopher Alexander, winner of the first medal for research ever awarded by the American Institute of Architects, is a practicing architect and contractor, Professor of Architecture at the University of California, Berkeley, and Director of the Center for Environmental Structure. He also wrote Notes on the Synthesis of Form.